Amulet Studios is a partnership between myself and my friend, Brian Dean. We first started making shorts and shooting stuff together more than 20 years ago.

He has worked in animation ever since, with credits at Blue Sky Studios (think Ice Age) and Sony.

He's been telling me for years that gaming engines have the potential to redefine the animation pipeline and expense structure. I believed him, but I was busy with other projects. Thankfully, those proved successful, which gives me some time and money to help see if we can be part of that wave.

It's a bold effort. We may fail. But we're going for it.

At the moment, that mostly means him doing a lot of the heavy lifting and me pitching in with funds, marketing effort, and some technical know how. But we've also commissioned concept artwork from two artists in Italy. We've partnered with a company in the UK to help us with character modeling and rigging. We're working with a contractor in Norway on game engine and motion capture mechanics.

And we've got a few more surprises in the works, including the imminent launch of our membership service, where we'll take members along with us for the ride behind the scenes.

Our goals is to produce an animated series called Thera. To find out more about Amulet AND Thera, visit the Amulet Studios website or follow us on YouTube and other social media. It's scary, and it's exhilarating. 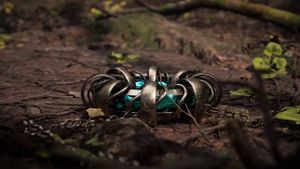