We grabbed fish and chips at Red Lion pub. Visited Haggards, the oldest bookstore in London, because that's what you do. I was intrigued by a handful of American history books written from a distinctly British perspective. Finally, we hit up a couple bars and taverns for beers and to escape the rain,

Last week, the girlfriend and I took our Quarantine Roadshow to a tiny Wisconsin cabin we found on Airbnb. Our goal was to mix up the routine for a few days, do some hiking, experience some nature, and find a way to enjoy our now-traditional Autumn adventure despite the best efforts of a pandemic.

I won't go into all the details of the trip, but I do want to talk about my attempts to shoot video along the way.

Every shot was taken on one of four devices: a Pixel 4XL phone, my GoPro Fusion MAX camera, a DJI Mavic 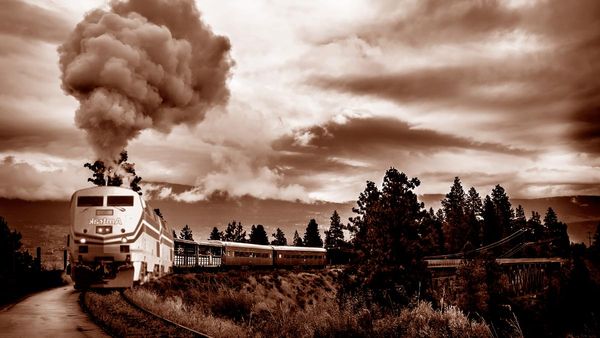 This past weekend I boarded an Amtrak train from Chicago to Ann Arbor, Michigan. Mostly I did it to avoid traffic on the way to visit family, but I also planned a pleasant period of uninterrupted reading.

The verdict? I loved it.

Of course, as a fan of all things sepia-toned, I possess a rather dated mental image of long-distance rail travel, at least in a cinematic sense. To my imagination’s horror, there was no billowing smoke stack. No roaring hiss of steam. No elegant ladies clad in dark corsets, cage-crinoline skirts, waist coats, and myriad layers of confusing